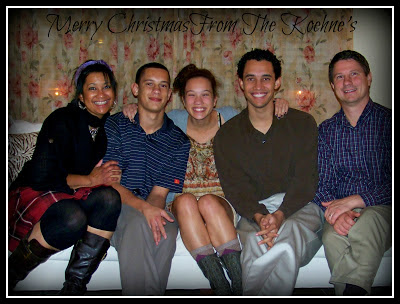 My husband and I are not big on shopping or getting caught up in the hustle and bustle of the Holiday season. We try to take it slow, lay back and try to keep things in perspective. This year turned out much differently than other years in that no one made it to a store to do ANY shopping and the amazing part of it was that none of us felt any pressure to either.

So where does this leave us? Let's see, Christmas Eve we attended church, came home and had a wonderful family dinner and then gathered around the tree where there were a few cards from some family. Now feeling a bit of the pressure, unbeknownst to the other family members everyone quietly proceeded to go wrap their "gifts."

Well, it turned out that we all had the same idea...lets sneak into peoples room, find things that belong to them and wrap them up! And that's just what happened.

As the kids began to open there frantically wrapped presents we all quickly realized that each gift was a joke waiting to happen. My daughter laughed as she opened a box with one of her slippers in it, a half eaten candy bar, an empty CD case and some clothes pins. 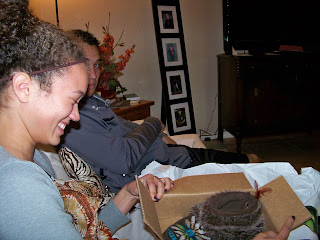 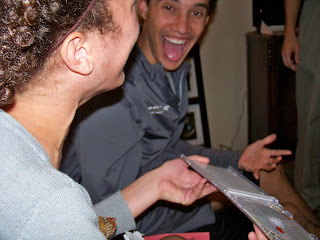 As the gift event went on, we turned each turn into an opportunity to laugh, each laugh bigger than the one before.

Being a competitive family, it became a sort of competition to see who gave the best "Worst" gift. Even the gifts that we gave our kids (which was a envelope with some cash) had a used item from their own room and was met with tons of laughter.

I guess what made that Christmas Eve so special, obviously, was not the gifts, but truly the time together laughing and loving each other. While we didn't plan to do a gift-less Christmas, I tell you, it just doesn't get much better than this.

So we already have plans for next year.....The gift giving competition. Find the best worst gift from Goodwill and carry the title for a year of "The Best Worst Giver". Granted, this may not work in most families, but for us, Koehne's, it works just fine!!

Mia K
An imperfect servant of the Lord, fumbling my way through life, looking upward for guidance and outward to love.